Seven Ways to Celebrate the Mercury 7 for The Right Stuff

As we approach the 60th anniversary of Project Mercury, this story of human ingenuity, perseverance, and pride comes rocketing back to life with the premiere of National Geographic’s The Right Stuff on Disney+. The series rocketed off with a special two-episode premiere on October 9, 2020. The Space Race was a major driving force of Brevard County, affectionately known as Florida’s Space Coast, and NASA’s presence is still a major tourist draw to this day. Many space-related TV shows and movies have filmed on the Space Coast from some based in reality to others that were fiction. Portions of The Right Stuff were filmed here, from the beach to the launch and even a re-creation of how local dealership Rathmann Chevrolet looked in the 1960s when they leased Corvettes to the astronauts. Space fans can step back into history to celebrate the Mercury 7 with many special experiences at the Gateway to Space. See the spots below in this handy map.

Book a stay at the La Quinta Inn Cocoa Beach-Port Canaveral to begin your trip back in time. Originally called the Cape Colony Resort, the Mercury 7 astronauts were minority stakeholders in the then-new property and it is fondly remembered as the Home of the Original 7 Astronauts. You can find signage dedicated to them, a mural of their famous photo in their spacesuits, and other photos from the era in the lobby. Relax by the pool with a copy of Tom Wolfe’s book, enjoy some classic shuffleboard, or curl up in your room rewatching the Comic-Con @ Home panel where the actors mention their memories of visiting the Space Coast while filming season one. 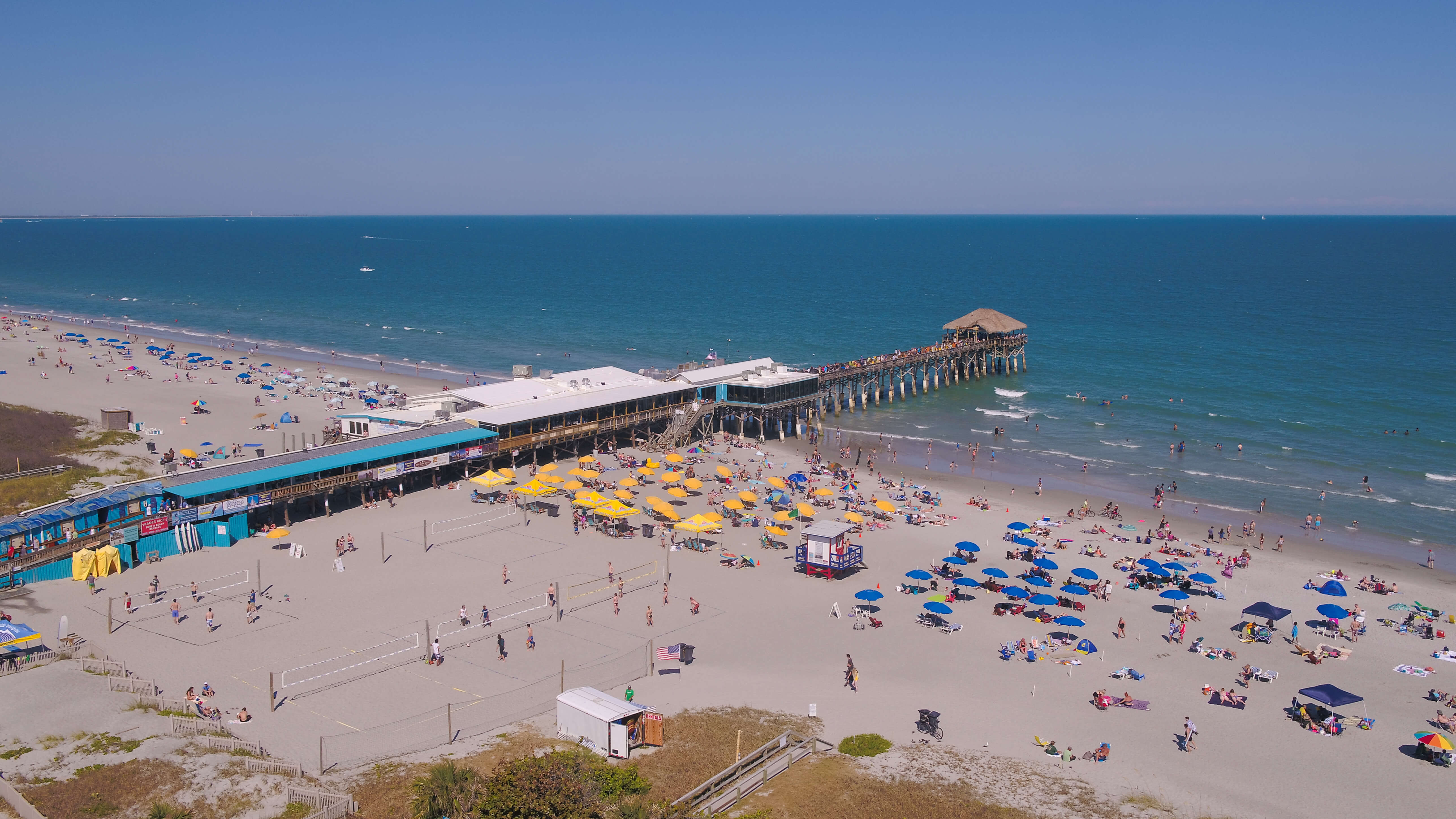 Known as the Last Stop Before Space, this was where the astronauts and their families enjoyed their time before setting off on their historic and dangerous missions. Although the bars and restaurants they frequented no longer exist, there are still plenty of ways to enjoy the area. Stroll down the Westgate Cocoa Beach Pier like Alan Shepard, or head to the park bearing his name to enjoy the sun, sand, and surf. Surfing became quite popular during the era, and the Mercury 7 were even spotted enjoying the waves. Head to the flagship Ron Jon Surf Shop, which set up shop in the early 60s, for surf lessons, rentals, and all the beachwear you could ever want. Film crews spent time at Sidney Fischer Park, Lori Wilson Park, and along the beach south of the Westgate Cocoa Beach Pier.
Producer Llew Wells: "The Space Coast is such an important character in our actual story," producer for "The Right Stuff," Llew Wells told FLORIDA TODAY via email. "Being able to shoot parts of 'The Right Stuff' series in some of the places that the events actually took place is invaluable. It will lend levels of authenticity and a sense of place that we simply can't capture any other way." (Florida Today)

The average person may never get a chance to see what the astronauts do in the last moments before launch, but you can come close with a biplane or helicopter tour from Florida Air Tours. There are special packages available where you can not only soar over the Kennedy Space Center Visitor Complex for a unique view but also fly down the Space Shuttle landing runway. While you’re up there, take a look at the beautiful Indian River Lagoon and Merritt Island Wildlife Refuge. Few people realize that such a diverse ecosystem is thriving right beside the incredible technological advancements of NASA! 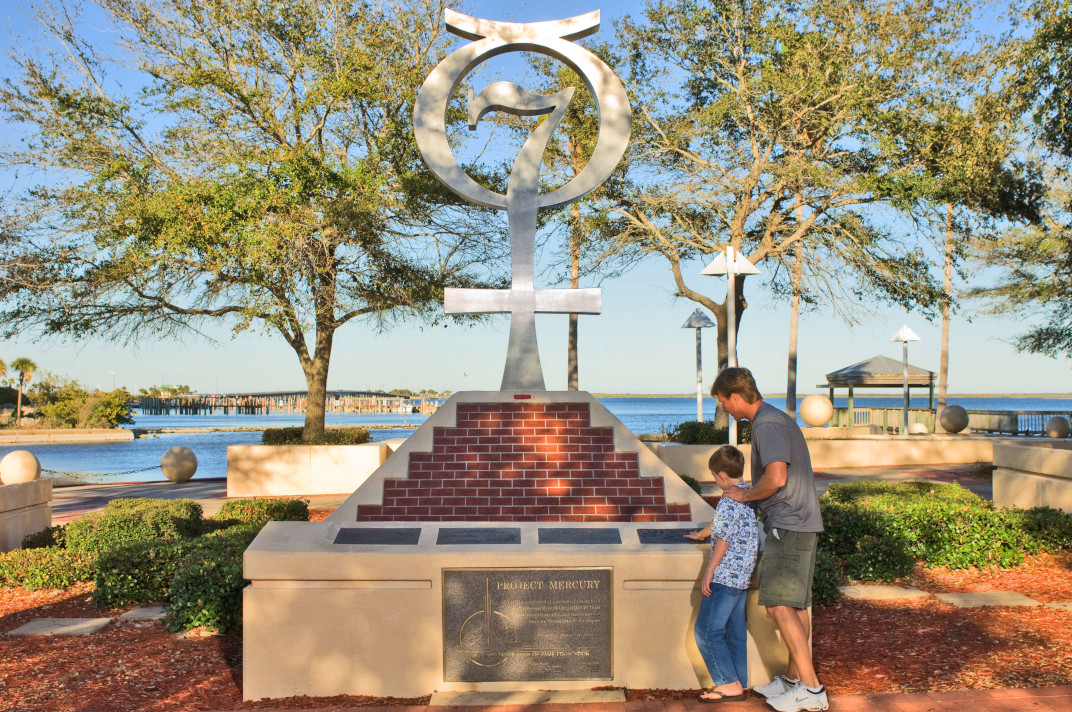 Up in Titusville across the river from the Vehicle Assembly Building and launch complexes sits a small museum bursting at the seams with artifacts. The American Space Museum and Space Walk of Fame includes incredible artifacts donated by astronauts and their families, and many NASA workers and contractors. Their collection includes interactive launch controls from the Space Shuttle and Atlas-Centaur missions, pieces of the shuttles, launch suits, and more. In the Mercury/Gemini gallery, you’ll find one of Gus Grissom’s flight suits, the button that launched John Glenn, and the hatch from the Mercury-Atlas 1 test launch. Docents who give the tours were workers on missions throughout the history, and if you come on the right day, you may catch them hanging out and sharing stories of the good ‘ole days. The museum also has free astronomy programs.

3. Stroll down the Walk of Fame

Down the street from the American Space Museum, you’ll find their Space Walk of Fame. It begins at Space View Park, named in part for the spectacular views of launches across the river from Kennedy Space Center. There are stunning monuments for each of the space programs up to the Shuttle program and includes bronze handprints of many astronauts, including every Mercury astronaut except for Gus Grissom as this project began after his death. You can track the progression from Mercury to Gemini and then Apollo as these heroes continued their careers. While walking through Titusville, keep an eye out for the beautiful murals around downtown that reflect on the history of the city, including the space program. 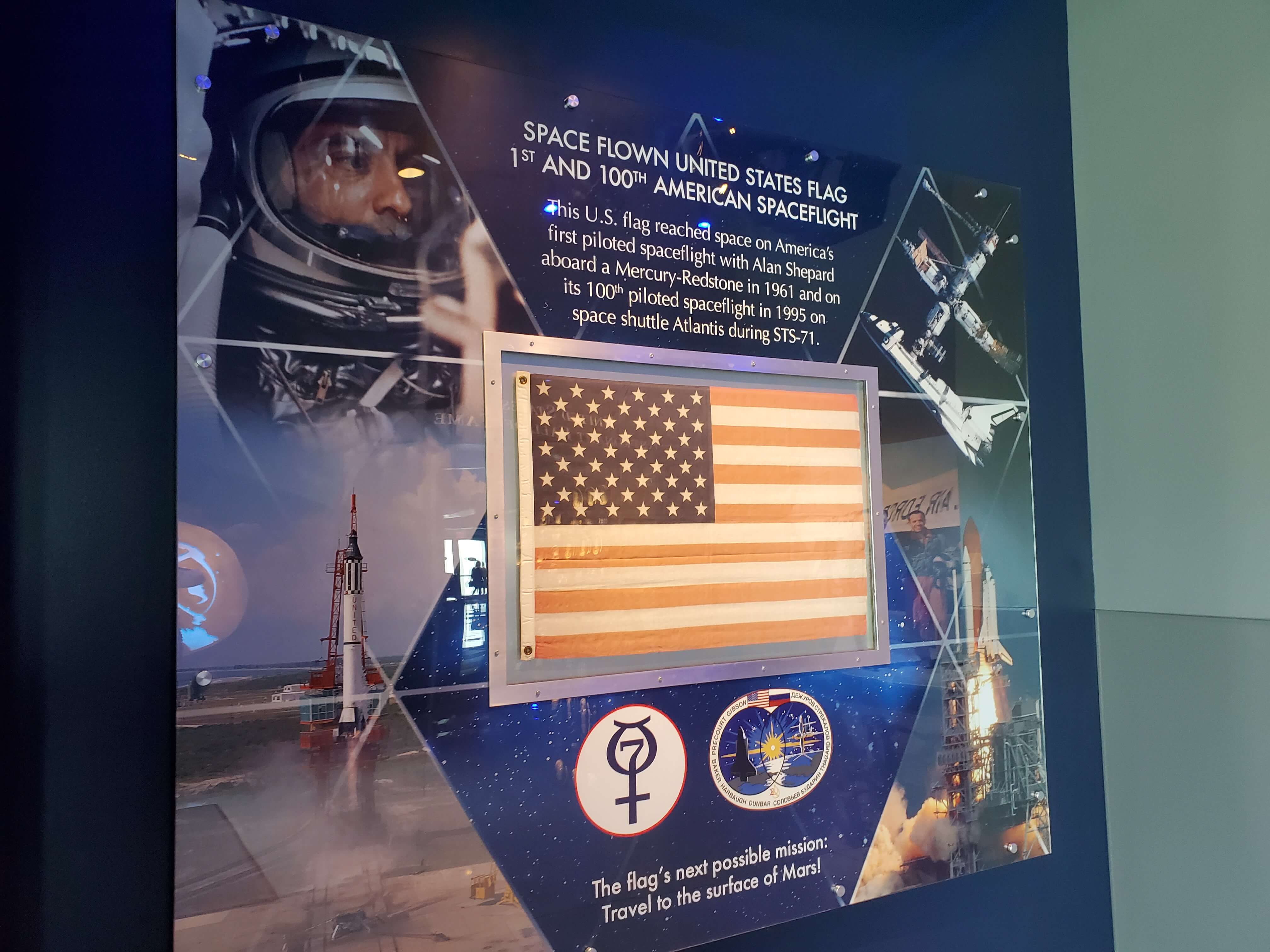 Begin your day at Kennedy Space Center Visitor Complex with Heroes and Legends featuring the U.S. Astronaut Hall of Fame. Did you know that the six surviving Mercury 7 astronauts were the ones who came up with the idea to honor US space travelers in the 1980s? This incredible building holds personal artifacts from the Mercury 7 missions including Gus Grissom’s spacesuit, famous LIFE magazine covers, Walter Schirra’s Sigma 7 capsule from Mercury 8 attached to a Redstone rocket, mission control for Friendship 7 (Mercury 6, John Glenn), and the NASA sign that hung in the Mercury Mission Control Center.

When bus tours reconvene, take the Cape Canaveral Early Space Tour or the Cape Canaveral’s Rise To Space Tour to see the historic launch sites and the Air Force Space and Missile Museum on Cape Canaveral Air Force Station. You’ll get to see the inside of a blockhouse with the controls used for launch, learn the history of the animals that paved the way for the Mercury 7, Launch Complex 5/6 where Alan Shepard and Gus Grissom’s flights took off, with a full-size replica Mercury-Redstone on the launch pad, pad 14 where John Glenn and the rest of the Mercury flights took off (their personal parking spots are still there), and a special Mercury 7 monument where their time capsule is buried. Some scenes from The Right Stuff were filmed here at these historic locations.

Colin O’Donoghue (playing Gordon Cooper): “It was an incredible experience to not only visit, but to shoot it there and just to be in a place where so much history has taken place,” O’Donoghue said. “To sort of stand in a place where Alan Shepard would first go up and the bravery that would have taken and the sort of craziness of the ... it’s amazing.” (Orlando Sentinel)

Executive Producer Mark Lafferty: “We were permitted to go in and use the actual control facilities, so anything you see in the show during Alan Shepard’s launch … that’s all real stuff. There’s no production design there. It’s all the real control panels and everything,” Lafferty said. “That was just a total gift to the show.” (Orlando Sentinel) 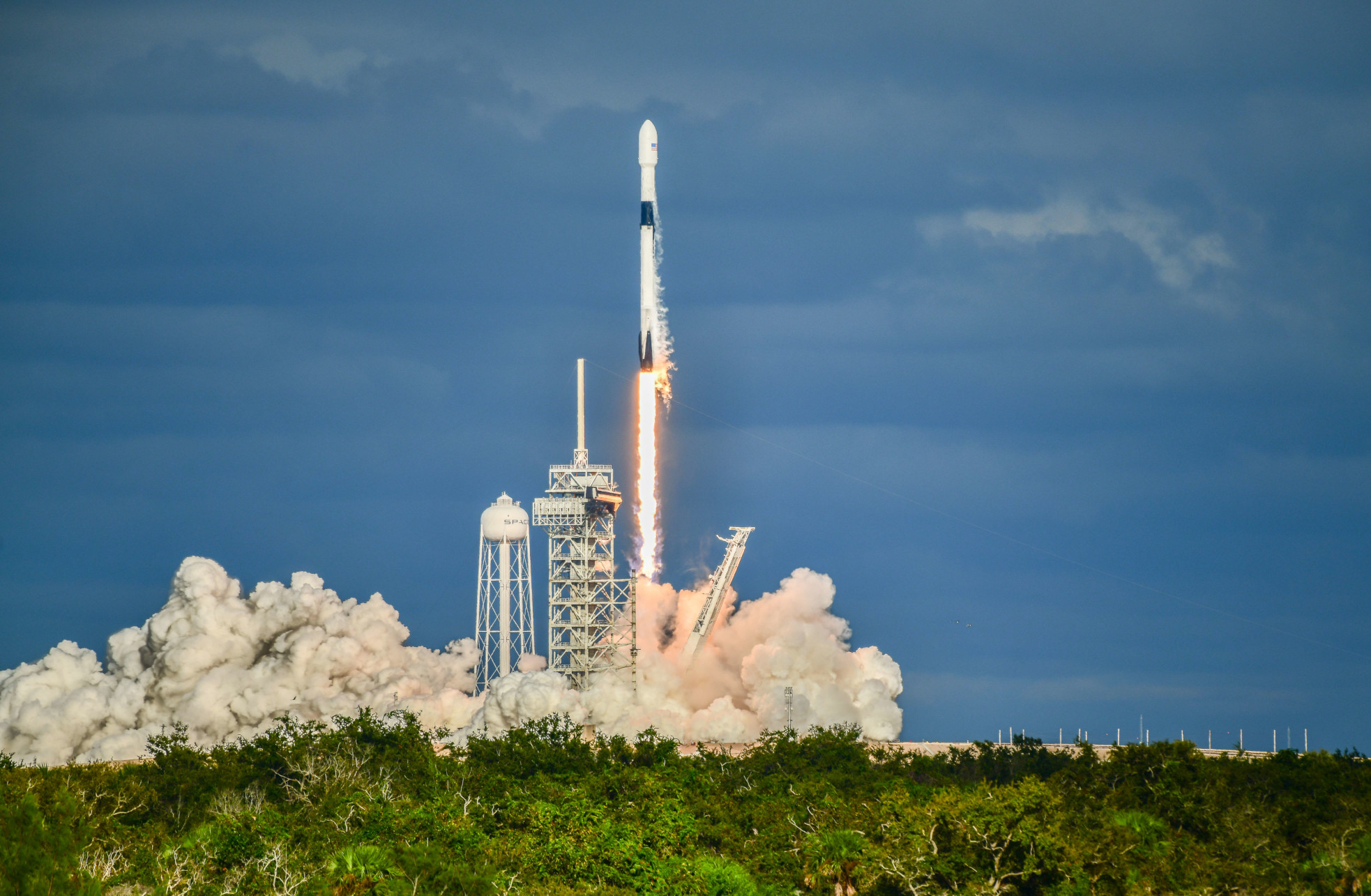 The saga of human spaceflight continues right from the Space Coast with SpaceX Dragon. Crewed space flight returned after a nearly decade long absence with the Demo-2 launch on May 30, 2020, with astronauts Doug Hurley and Bob Behnken. In Late 2020, SpaceX Crew-1 will launch astronauts Michael S. Hopkins, Victor J. Glover, Sôichi Noguchi, Shannon Walker. The capsule used is reminiscent of the early era of crewed space flight, complete with the splashdown which can happen off the coast of Cape Canaveral and return to the Port. Check out this map for great places to view a launch from.

Bonus Experience: Come check out the Valiant Air Command Warbird Museum. You can see planes the same models as ones flown by the Mercury 7 astronauts during their military careers before joining the program.